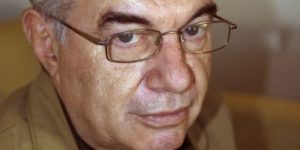 Born in Ksanthi in 1944, Şerif Gören attended the Istanbul High School for Boys and began his film career in 1962 as an editor. He made the transition to directing somewhat unwittingly in 1974 when Yılmaz Güney was arrested while shooting the film Endişe (Anxiety). Gören was then pitched from the post of second director into assuming full responsibility for finishing the film by himself. His performance drew attention, and Endişe (Anxiety) came away from the 12th Antalya Film Festival with awards for Best Director and Best Film. Gören has directed 37 films to date across a cross-section of genres ranging from melodrama to comedy. Through­out his career, he has made a point of addressing social problems in his choice of themes, although the films he made in the late 1970s – notably Derviş Bey and Köprü (The Bridge) – had a greater emphasis on the clash between the popular and intellectual classes. In 1981, he made Yol, a film based on the screenplay by Yılmaz Güney, which won the Golden Palme in 1982, one of the biggest awards ever garnered in the history of Turkish cinema. Amerikalı (The American), his most recent film, which was made in 1993, was the first local film to prove a major box office hit. Gören’s favoured themes typically include social change, the struggle between man and nature, and woman’s place in society.