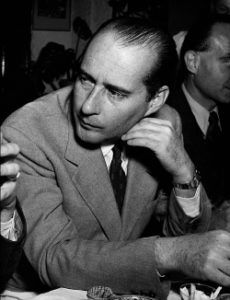 The son of a wealthy Roman architect, writer/director Roberto Rossellini was more technically than artistically inclined when he began making amateur films as a teenager. His 1938 short subject Prelude to the Afternoon of a Faun, was considered worthwhile enough by some film-industry insiders to warrant a theatrical release; unfortunately, it was banned by Italy’s censorship bureau on the grounds of indecency. Even so, when Vittorio Mussolini – the dictator’s movie-executive son ( and a family friend ) – invited young Rossellini to become a professional filmmaker, the 22-year-old dilettante jumped a chance. Assigned to direct a documentary about an Italian hospital ship, he expanded the project into fictional feature, The White Ship, completed in 1940 and released the following year. In 1943, he began work on what many consider the first neorealist film, Desire, in which, utilizing a hand-held camera, Rossellini attempted to approach his subject matter as a spectator rather than director. Unfortunately, he was forced to drop the project, which would be completed by other, more conventional hands three years later. Nonetheless, his brush with cinematic naturalism had left an impression, and, in 1945, he gained international fame with his stark, neorealist feature Rome Open City / Rome, Open City. Country (1946) and Germany Year Zero (1947) followed it. Rossellini devoted his energies almost exclusively to TV films after 1960’s. In his last movie, The Messiah (1978), the director once more stirred up controversy. Rossellini died 1977. His autobiography, My Method: Writings and Interviews, was published posthumously in 1933.