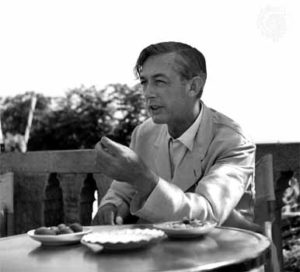 One of the most respected “auteur” of cinema, Robert Bresson holds a unique place in French and world cinema. Throughout his film career, the director who has been called a poet and a philosopher with a camera, always adhered to artistic and spiritual objectives only, never veering off to commercial production.Bresson’s originality within French cinema is twofold. First, he is almost unique in pursuing a religious discourse; second, his dislike of actors and use of unknown amateurs runs counter to the great French tradition of performance and dialogue based cinema. His opposition to mainstream cinema, the coherence of these themes and mise-en-scene and his self-scripted films have made him one of the models for the future Nouvelle Vague since the mid-1950s. Bresson’s quest for a pure cinema actually relates him to an even earlier tradition, that of the French avant – garde of the 1920s. Robert Bresson was born on 25 September 1907, he took a degree in literature and philosophy. He originally pursued a career as a painter and photogra­pher but turned to film in early 1930s. In a mere 13 features in his 40-year career, he was able to carve out a unique body of work. Unlike many so-called “auteur” Bresson has resisted falling in step with such trends as Neo-realism and the Nouvelle Vague. In accord with his disgust with the artificiality of popular cinema, and advocating the philosophy of “less is more”, Bresson was most comfortable with limited subject matter, small casts, minimal plots, and restrained and precise economy of images. An artist of refined vision, Robert Bresson defies easy categorization. This almost obscure, but fundamental figure of film history, who has made relatively few films belongs to no school or movement, and spawned no disciples. Though always avidly admired by a small coterie of academics and other cognoscenti, he has never been received as widely and enthusi­astically as he deserves.