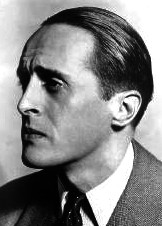 Prominent film director and script writer René Clair was born as René-Lucien Chomette in 1898. After working for a while as a journalist, he soon discovered a passion for cinema whilst acting in some of Louis Feuillade’s films. He followed his apprenticeship under director Jacques de Barnocelli by making his first film in 1924, Paris Asleep (Paris qui dort), a comic satire with a science-fiction theme. In his subsequent films, Clair developed his penchant for satirical surrealism in films which were highly regarded at the time and which are now considered to be masterpieces. These include Entr'acte, Under the Roofs of Paris (Sous les toits de Paris) and Freedom for Us (À nous la liberté), the latter of which is reputed to have partly inspired Chaplin’s Modern Times. He made one film in Great Britain The Ghost Goes West before moving to the United States where he directed half a dozen more down to earth American films including The Flame of New Orleans and I Married a Witch. Clair returned to France after the war and resumed his film-making career there, but with noticeably less success. Whilst his first film Silence Is Golden (Le silence est d'or) was very popular, his subsequent films were increasingly less well received. Despite this decline in his career, René Clair is now universally regarded as one of the most significant figures in French cinema history. His wit, imagination and drive helped French cinema to maintain its pre-eminent position in the 1920s and ’30s. To acknowledge this fact, he was elected to the French Academy in 1962, the first film director to receive this great accolade.