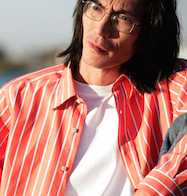 Nariman Turebayev directed a number of student films at the Moscow Institute of Steel and Alloy and at the Kazakhstan Arts Academy before working as a screenwriter and assistant director to Ardak Amirkulov. He directed the satirical short film, Antiromantika (2001) which was screened at Cannes. Turebayev directed his first feature, Little Men (2003) which was followed by his second feature, Sunny Days (2011) both competed in Locarno. Adventure is his third feature film.