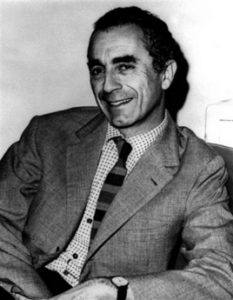 Michelangelo Antonioni was born in Ferrera in 1912. As an undergraduate at the University of Bologna, he wrote theatre and film reviews for the journal, Cinema. He later attended the film school at the Centro Sperimentale. His cinema career started as a scenarist and assistant director in the early 1940’s, and in the later half of that decade, when neo-realism first began to emerge in Italian cinema, he made six distinctive short documentaries. He was 38 as he made his first fiction feature, Cronaca di un amore, in which he began to depart from the neo-realism. He used professional actors in middle-class settings and portrayed his characters withless social emphasis, and a more personal and psychological manner, stressing what he later described as spiritual aridity and moral coldness. His first film was followed by four other films in the mid-1950’s. Antonioni did not come to international prominence until 1960 when he made his masterpiece, L’Avventura. After realising significant films in Italy, he began to make films in other countries. His first film abroad was Blow-Up, which was made in Britain, based on a short story by Julio Cortazar. The film was internationally an enormous commercial suc­cess, one that Antonioni was never to repeat. He made Zabriskie Point in the United States and The Passenger, in Africa and in England. In 1995, he won a special Academy Award for his lifetime achievement in film. In the same year he directed Par Dela Les Nuages with Wim Wenders. He died in July 30th, 2007 in Rome.