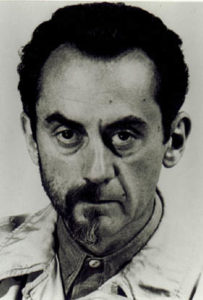 A tireless experimenter with photographic techniques who participated in the Cubist, Dadaist, and Surrealist art movements, Man Ray created a new photographic art which emphasized chance effects and surprising juxtapositions. Man Ray was, with Moholy-Nagy, the most significant maker of cameraless photographs in the 1920s and 1930s. Man Ray was given that name by his family when he was 15, and wished to be known only by that name. He was born in Philadelphia and later moved with his family to New York City where he attended the Academy of Fine Arts and the Ferrer School. He had an early desire to become a painter, studied architectural drawing and engineering and began his career as a graphic designer and typographer. He moved to France in 1921, welcomed by artists such as Tzara, Brandon, Rigaut, Soupault, Picabia, and it was there that he made most of his films. Film, far more than simply an art he practised outside the industry system as an artist-craftsman, was the art that prompted his most productive artistic thinking. It was through film and in film that he was particularly innovative: camera-less film and the Ciné-rayogrammes with his first film Return to Reason (Le retour à la raison) in 1923, the play on optics and narratives, going far beyond story-telling, as he himself described: No stories, each film offered to the audience is the culmination of a way of thinking as well as of seeing, in Emak Bakia in 1926, Etoile de mer in 1928, The Mysteries of the Chateau de De (Les Mystères du Château du Dé) in 1929. Ray fled Paris before the Nazi occupation in 1940 and settled in Hollywood where he continued to work and teach for the next 10 years. Photography took second place to painting for the rest of his career, although he experimented with color photography in the late 1950s and early 1960s.