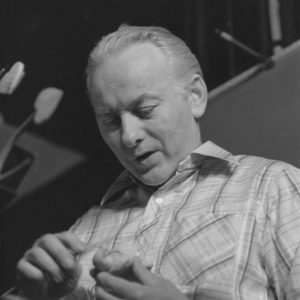 Ludvík Kadleček, an animator and director, was a guiding artist at Zlín’s animation film studio, where he spent his entire professional life. He was a stage artist at the studio of Hermína Týrlová. He made his debut with the film Why Does the Giraffe Cry? (Proč Pláče Zirafa, 1960) with the first use of a children’s folding book. He also worked with clay, different types of fabric and with live-action sequences. He made dozens of short films and TV series made for children, e.g. The Bird that Stomped (O Ptáku, Který Dupal, 1969), Boo Boo Boo (Bububu,1982), Chicken (Kuře, 1986) and Car Romance (Autíčková Romance, 1990).