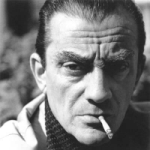 The director of Ossessione (Obsession), a film that helped launch an entirely new vision in Italian cinema, Luchino Visconti (1906-1976) was born the son of an aristocratic Lombardian family. His father, Count Modrone, was descended from the Viscontis, who ruled Milan from the 13th to 15th centuries, while his mother hailed from Erba stock, a family powerful in the chemicals industry. Growing up in a family that combined nobility and substantial wealth, Visconti found himself mixing with luminaries, particularly from literary and arts circles, at an early age. But he was sensitive by nature, at once questioning and headstrong, and this made it hard for him to fall in with his milieu. Visconti, who often ran away from school, left home as a mere youth and after completing his military service in the cavalry, he spent five years breeding race horses. His departure for Paris as he neared 30 was both to inspire his love of cinema and to change his outlook on life. Visconti himself later recalled, “When I arrived in Paris, I didn’t know a thing about politics. The friends I made opened my eyes, for all of my friends were signed-up members of the communist party.” Impressed to the point of converting to communism himself, Visconti remained committed to his left-wing leanings for the rest of his life. It was in Paris that Visconti was introduced to Jean Renoir, and in Renoir’s Une Partie de Campagne (1936) that he was introduced to cinema, working on the film as Renoir’s assistant. Just like Renoir, his declared ‘master’ in the world of cinema, Visconti gave overriding emphasis in his films to acting, a priority shared by few of his contemporaries. Said Visconti, “My greatest passion as a director is directing the actors. The way to create a new reality, the reality of art on screen is through directing the actor.” The director worked as Renoir’s assistant on three further films before shooting his feature debut Ossessione (Obsession, 1943), an adaptation of American wr