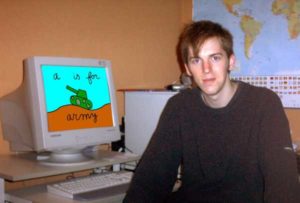 He was born in 1982. In 1999, he began studying animation at the Royal Academy of Fine Arts (KASK). During his studies, he worked as an actor at the theater group “The Lunatics”. His graduation film Flatlife was still not completed when it was selected for the Short Film Competition at Cannes 2004.