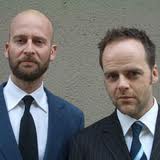 Johannes Stjärne Nilsson and Ola Simonsson were both born in Lund, Sweden in 1969 and have known each other since the age of seven, when they performed together in a school play. Since completing a Masters degree in Fine Arts in Stockholm, Johannes has been a graphic designer, a cartoonist, a director and a producer. Ola graduated from Malmö Conservatory of Music and is a musician, a singing teacher, a director and a composer. Neither studied film in school or followed any training in this field. The duo premiered in Cannes in 1996 with their surrealistic short Nowhere Man, selected for the Critic’s week. Their short Music for One Apartment and Six Drummers was screened in Official Selection at the 2001 Cannes Film Festival and has won more than 30 international awards. In 2006, the Swedish duo returned to the Croisette with the Critics’ Week-selected short Woman and Gramophone. Kostr- Film, their Stockholm-based production house, produces musicals, shorts and documentaries