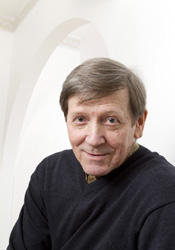 Heikki Prepula was born in 1939. As a young man Prepula worked as a journalist for some years. From those experiences he has taken to using some social themes as building-material for his animated films, for instance; helping friends, peaceful coexistence, solidarity, efforts to find solutions to problems, defending the weak. Prepula started his career in animation in 1965. In the beginning he worked for television making long animated serial films for children, he later started to produce his own short films. Since the 1980s Heikki Prepula has been the only artist-producer in Finland to produce his own animated films as a private artist without production companies. His productions are non-commercial low-budget short films, mainly for children. Prepula has made 29 animated films. Besides drawing, animating and working the camera, Prepula also does the sound effects for his films. Heikki Prepula has also drawn numerous illustrations and cartoons for books and magazines. His published illustrations amount to 4700 pieces and 360 cartoons.