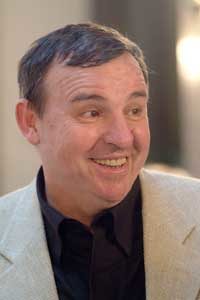 Goran Markovic was born in Belgrade in 1946. His parents, Olivera and Rade Markovic, were well-known actors. In the rebellious Sixties, Markovic was a young adult who, just like his contemporaries, was confronted with all kinds of norms and values that were put up for debate. Throughout the western world, student protests in the late Sixties led to great changes. In Eastern Europe, it was primarily Czechoslovakia where the new freedoms could be embraced, leading in film to the Czech Nouvelle Vague. In those tumultuous times, Goran Markovic was studying in Prague at the famous FAMU Film School, where he was briefly able to taste the adventages of the freedom. His experiences in Prague were to influence Markovic artistically and personally; as he stressed himself, the disgust at any form of totalitarian regime that characterizes almost all his work came about there. The Prague period also offered him and his collegues an opportunity to look at their fatherland from a distance, and to learn to understand it better. After he left Prague in 1969, back home in Belgrade, he was asked to act in the first film by Jordan Zafranovic. His first feature, Special Education in 1977, was an enormous success in the cinemas of Belgrade. In the next 20 years, Markovic grew into one of the most important representatives of Yugoslavian auteur's cinema. With his central theme, the nature of the human soul, Markovic has always worked on his ultimate film. With the mosaic of characters that he presents in his films, he always creates a living mirror of Yugoslav society.