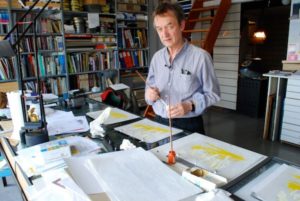 He was born in 1944 in Reconvilier, canton of Bern. He studied at the Art School and College of Decorative Arts in Geneva from 1961 to 1965. After working in an advertising agency from 1966 to 1970, he founded the GDS Studio with Claude Luyet and Daniel Suter where they works on TV titles, posters, advertising drawings and short animated films. In 1983 he went to Shangai to study Chinese. In 1992 he did sets for the play The King and the children as well as a fresco on a building in Geneva.