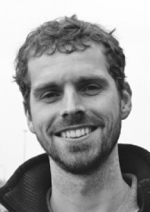 Frodo Kuipers studied at the ABV in Tilburg, in the Netherlands, and at KASK Ghent in Belgium. He graduated with honours with the film Antipoden. This film was selected at many festivals and received several awards. Between 2002 - 2005 he was a participant at the Netherlands Institute for Animation Film (NIAf) where he directed two films: Shipwrecked and Street. In March 2005 he founded Studio Mosquito. Since then, he has worked as an animator, director, storyboard artist on several projects, and received a grant from the Dutch Film Fund to make an independent short Bricks, produced by Il Luster Productions. He also works as a musician and actor, and is an animation teacher at the Willem de Kooning Academy in Rotterdam.