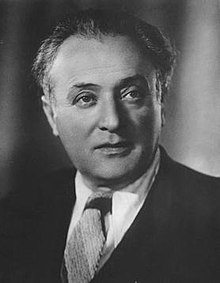 Fridrikh Markovich Ermler was a Soviet film director, actor, and screenwriter. He was a four-time recipient of the Stalin Prize. From 1923 to 1924 Ermler studied at the Cinema Academy. In 1932 he took part in creating one of the first Soviet talkies – the movie Vstrechny (The Counterplan). He was one of the main figures in the Soviet propaganda movie industry.