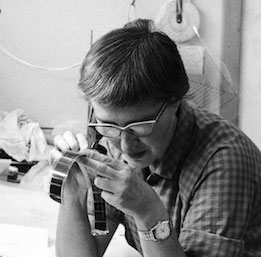 Evelyn Lambart was a Canadian animator and technical director with the National Film Board of Canada, known for her early collaborations with Norman McLaren as well as her later films, as sole director. She is known for her work on Begone Dull Care (1949), Rythmetic (1956) and Lines: Horizontal (1962). In 1978, she was the subject of a biographical documentary entitled Eve Lambart directed by Margaret Wescott.