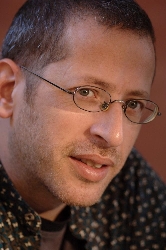 David Volach was born in 1970 in Israel. He was brought up, together with his 19 siblings, in an ultra-orthodox family. The family lived in the Haredic commu­nity in Jerusalem, one of the most orthodox Jewish communities in the country. In his late teens, he studied in the Ponevezh yeshiva. During that time, he began his long process of secularization. At the age of 25, he left the religious community, became secular, and moved to Tel-Aviv. There he took film courses for a year. My Father My Lord is his first feature film.