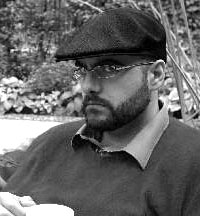 César Velasco Broca was born 1978 in Amurrio. He made his direction debut with Footsy, a Super 8 short-film about sexual relations with dead horses. The local success of this short let him start his second 16mm. shooting, Kinky Hoodoo Voodoo, however he could not finish the project. After La Costra Láctea, his second film, he had chance to finish Kinky Hoodoo Voodoo and the film won several prizes.