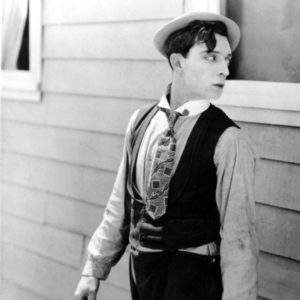 One of the all-time greatest comedians in the history of cinema, Buster Keaton was almost consigned to oblivion like so many other stars of the silent era. That said, after a long hiatus he made a comeback with Limelight (1952), the comedy drama of another great comedian, Charles Chaplin.
Keaton was born the son of vaudeville actor parents in 1895 and, as legend has it, was given his name by the famed illusionist and escape artist, Harry Houdini. At just 18 months of age, Keaton took a tumble down the stairs and suffered not so much as a nosebleed. Scooping the child up off the floor, Houdini is said to have remarked, “That was a real buster.” Back in the day, a ‘buster’ apparently referred to a potentially injurious fall. Aged a mere three, Keaton began performing in his parents’ vaudeville act. In the years that followed, he was to tumble down many more flights of stairs, fall out of windows or be dragged along by high winds.
When he left home in 1917 and went to Hollywood, Keaton had the good fortune to meet Roscoe ‘Fatty’ Arbuckle, one of the best known comedians of the day. Taking Keaton under his wing, Arbuckle taught him the finer points of the profession. With his deadpan expression and extraordinary gift for acrobatics, Keaton became an almost instant success in Tinseltown. With the films he wrote, directed and starred in during the 1920s, he managed to create a world of his own in film. This output included The Navigator (1924), Sherlock Jr. (1924), The General (1926) and The Cameraman (1928).
Unlike Chaplin, who narrowly escaped disaster thanks to sheer luck and goodwill, and Harold Lloyd, who battled various physical disabilities just as his career was taking off, Keaton was an observer with a sharp intellect. No matter how tough the times he fell upon, he never lapsed into a pitiful character. His flawlessly designed, artlessly executed acrobatic feats continue to astonish audiences even today. In spite of this physical dynamism, his films invariably bear the hallmark of engaging melancholy.
Keaton was, however, ahead of his time and his breed of profound cinema gained little traction. In the 1930s, studio directors wouldn’t allow Keaton to write and direct his own films; rather, they offered him roles that were well below his talent. In the end, like many other silent actors, he gradually faded into oblivion along with the silent era itself.
Around a quarter of a century later, following the success of Limelight, Keaton’s acting prowess enjoyed a second heyday on the small screen. Eventually, in the 1960s his films came back into theatres and he recovered his former stature. It was during this period that he put his name to unusual work such as the famous writer, Samuel Beckett’s Film (1965).
Keaton died in 1966 at the age of 69. In the course of his lengthy career he worked with scores of well-known actors and directors. Many a pundit would argue that his deadpan expression reflects the anxieties of the individual in the modern age. The one certain thing, though, is that on the 50th anniversary of his passing his films remain as topical as ever and Buster Keaton, the man himself, continues to touch lives and make people laugh.