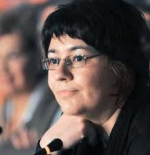 She received her BA in English Literature from Istanbul University in 1992. She worked for Turkish film institutions as international relations and festival manager from 1991 to 1998. Her debut short film Borealis premiered in the official competition at the 2006 Cannes Film Festival and won numerous awards in and abroad. Zephyr is her debut feature.