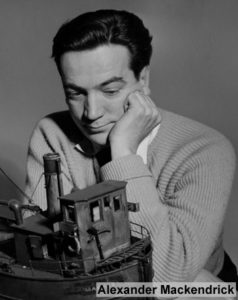 Alexander Mackendrick worked in advertising and then made propaganda shorts during WWII. In 1946 he joined Ealing Studios. He realized his directing debut, the comedy classic, Whisky Galore in 1949. He also directed Tony Curtis in his best performance, as the opportunistic press agent in the scathing drama, Sweet Smell of Success, Mackendrick’s first Hollywood film.