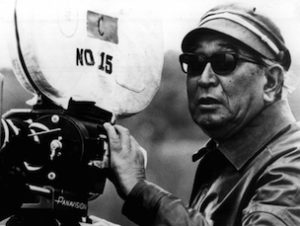 Born in Tokyo, on 23 March 1910. He studied at Dohusha School of Wstern Painting. In the late Twenties he attempted to make living as painter and did illustrations for popular magazines. He joined the Toho Film Company as an assistant director at the age of twenty-six. He also worked as a scriptwriter before being allowed to direct his firs film, “Sugata Sanshiro” (1943) from his own script. The ten films he made during the next seven years established him in Japan; and “Rashomon”, which won the Golden Lion at Venice in 1951, international reputation has broadened over the years with numerous citations, including an Academy Award for Best Foreign Language Film, the Grand Prize at the Moscow Festival for his 1975 Siberian epic “Dersu Uzala”, and the Golden Palm at 1980 Cannes Festival for “Kagemusha” Unquestionably Japan’s best-know film director, he is the true “auteur” of his films –he sets up his own shots, does his own editing, and writes his own scripts.