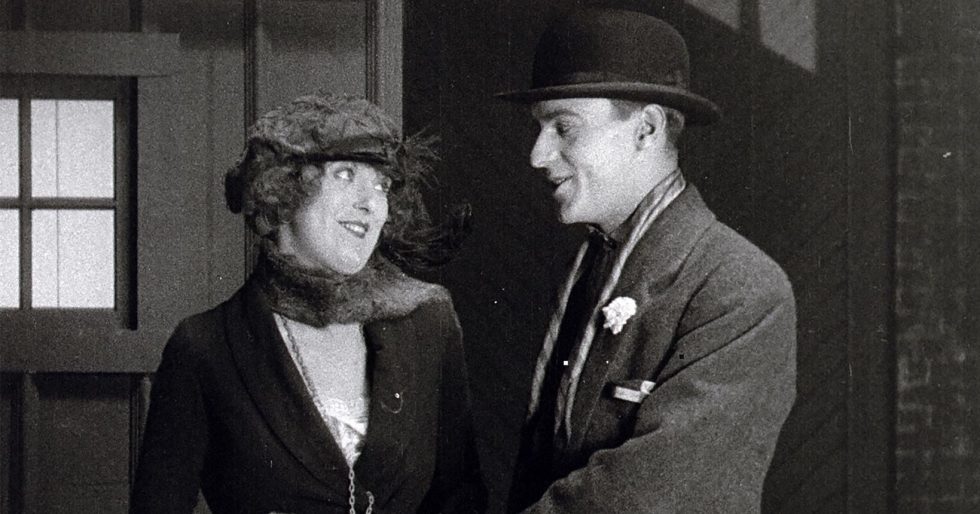 Just Around the Corner is about the poor family Birdsong; a mother and her son Jimmie and her daughter Essie who live together in New York City’s tenements. The children both work to earn a living, while the mother’s health rapidly declines. Essie is allured by the city’s glamourous nightlife, and she finds a job as an usher in a cheap theater where she falls in love with Joe Ullman, a crooked ticket speculator. Her mother repeatedly begs to meet Essie’s fiancé, but Ullman declines to pay visits. Jimmie fears that the tension will cause their mothers’ illness to get worse.

Adapted from a short story called ‘Superman’ by Fannie Hurst, originally published in The Saturday Evening Post in 1914, the film displays the unhealthy and unfair conditions of life and work in the big city. The film has almost documentary moments showing female workers forced to do after-hours work, or people struggling with the snow and cold in chilly winter weather.

For many years, Just Around the Corner could not be seen, since only two incomplete prints have survived in the film archives: one held at the Library of Congress (53 minutes, missing the ending) and the other at Eye Filmmuseum (58 minutes, missing significant sections like the dance contest). In 2021, these two archives joined forces to reconstruct the film using these incomplete elements, to make a new version that can be presented to the audiences.

Although complementing each other well in terms of continuity, these two prints originated from different negatives; one for domestic and the other for foreign release. This results in scenes entirely built up by different takes, shot from different angles, length and distance. Since the domestic version held at the Library of Congress contains the better takes, these were preferred whenever possible for the reconstruction. The last reel is entirely taken from the foreign release version held at Eye. It is important to note that while the result represents the most complete narrative, this combination of different shots and takes cannot be considered to represent the ‘original version’; neither of the domestic, nor of the foreign release version.

The original title cards that were present in the American print are used, even if they sometimes show significant decay. Newly translated and recreated cards from the Dutch print are inserted to make up for the missing ones. Both prints were scanned in 4K at the Film Laboratory of the Library of Congress’ National Audio-Visual Conservation Center in Culpeper, Virginia. The narrative is restructured at Eye by closely comparing the two versions, since the research did not yield the original script. The colors are digitally recreated at Haghefilm following the tinting scheme of the Dutch print. The speed is fixed at 19 frames/second, resulting in the total running time of 79 minutes.

Frances Marion (1888-1973) was a screenwriter, journalist, author and filmmaker and one of Hollywood’s most prolific women creators. Throughout her career, which spanned from 1915–1946, she both adapted other people’s texts and wrote original scenarios. Marion also taught screenwriting and published the textbook How to Write and Sell Film Stories. During her long career, Marion directed only two films herself; Just Around the Corner and The Love Light (both in 1921).