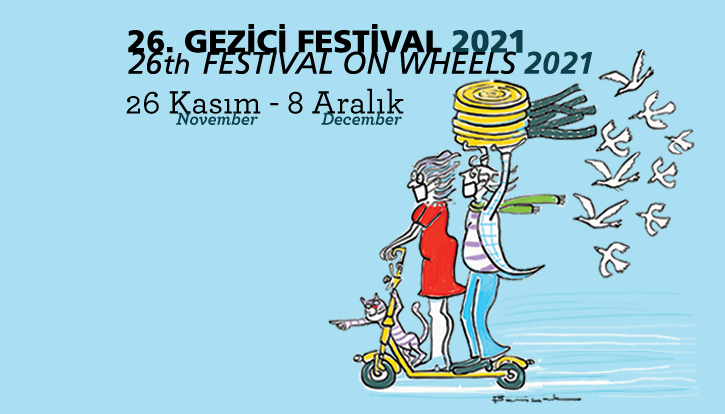 Countdown Begins to the 26th Festival on Wheels!

Run by the Ankara Cinema Association with the support of the Turkish Ministry of Culture and Tourism, the Festival on Wheels is soon to take to the road for its 26th edition with a curation of first-class films. After last year’s pandemic enforced hiatus, the Festival will raise the curtain in Ankara from 26 November-2 December, in Sinop between 3-5 December, and in Kastamonu from 6-8 December. The Festival offers the chance to watch inspiring examples of cinema on the silver screen, just as it has done for the past quarter century.
The Festival on Wheels is now poised to celebrate its 26th edition after years of enthusiastically plying the road to take the best of cinema to audiences around Turkey and bring about encounters that enrich our cultural lives.
Beginning on 26 November, the Festival will hook up with audiences in Ankara, Sinop and Kastamonu respectively, offering a program of now classic sections, among them World Cinema, Short Is Good and Turkish Cinema.

Another Festival Poster from the Faithful Behiç Ak
The poster for the 26th Festival on Wheels once again bears the signature of Behiç Ak, the veteran illustrator who has loyally supported the Festival since 1995 with his distinctive designs.

Latest Films at the Festival on Wheels!
The Turkey 2021 section promises the very latest crop of 2021 films that have screened and won awards at festivals around the world, including notably the work of up-and-coming first-time directors. In this latter category, the Festival on Wheels will be presenting Emre Kayiş’s Anatolian Leopard (Anadolu Leoparı), a drama about a zoo director’s battle with the grinding wheels of bureaucracy to prevent the privatization of the institution; but in charting the hapless fate of the endangered Anatolian leopard, the film also exposes the emotional world of those people whose fortunes are analogous. After world premiering at the 46th Toronto International Film Festival and coming away with the FIPRESCI Prize, the film debuted in Turkey at the 58th Antalya Golden Orange Film Festival, winning the Behlül Dal Best First Film and Best Art Director Awards. Uğur Polat, İpek Türktan Kaynak and Tansu Biçer co-star.
World premiering in the main competition of the 24th Shanghai International Film Festival in June, Necip Çağhan Özdemir’s Pure White (Bembeyaz) had its first showing in Turkey at the 58th Antalya Golden Orange Film Festival, where it picked up the SİYAD (Turkish Film Critics’ Association) Best Film Award. The film, which has since continued its tour of the international festival circuit at the Sao Paulo International Film Festival, will have its first Festival on Wheels screening in Ankara. Necip Çağhan Özdemir describes Pure White as turning the spotlight on individuals who have failed badly in their own beliefs, and says he wanted to consider where, who and what ideas such individuals are then forced to turn to. Mert Fırat, Ece Çeşmioğlu and İnanç Konukçu share the lead roles.

Ali Tansu Turhan’s debut feature, Dialogue (Diyalog), will have its first Festival on Wheels outing with audiences in Ankara. A film within a film that begins and ends on set, Dialogue encourages us to reflect on whether life influences films or films influence life. Hare Sürel and Ushan Çakır star in the leads.
In Between Two Dawns (İki Şafak Arasında), first-timer Selman Nacar works with a well-meaning, benevolent protagonist to examine class relations and the human psyche in a state of conflict and contradiction, but in so doing he also questions the boundaries of conscience. After world premiering in the New Directors strand of the 69th San Sebastian International Film Festival, the film left the 58th Antalya Golden Orange Film Festival with the Best Supporting Actress, Best Supporting Actor and Dr Avni Tolunay Special Jury Awards. The lead cast includes Mücahit Koçak, Nezaket Erden, Burcu Gölgedar, Erdem Şenocak, Ünal Silver and Bedir Bedir.
Also appearing in the Festival on Wheels program is Ferit Karahan’s Brother’s Keeper (Okul Tıraşı), one of this year’s eagerly anticipated productions. The film world premiered at the 71st Berlin Film Festival, taking the FIPRESCI Prize, and has gone on to screen and win awards at numerous national and international festivals. Set in a strict and repressive boarding school miles from anywhere, Brother’s Keeper tells the disturbing story of Yusuf, who finds himself challenged by the school bureaucracy, the indifference of the staff and hostile geography as he tries to get his sick friend to the doctor. Child actor Samet Yıldız plays the lead as Yusuf with Ekin Koç, Mahir İpek, Cansu Fırıncı and Melih Selçuk starring alongside.
Another award-winner screening at the Festival is Tayfun Pirselimoğlu’s Kerr, a literary adaptation which tells the story of a man trapped in the town where he has arrived for his father’s funeral after witnessing a murder. Starring Erdem Şenocak in the lead, the film recently came away from the 58th Antalya Golden Orange Film Festival with Best Director, FİLM-YÖN (Turkish Film Directors’ Association) Best Director and Best Music Awards.
Away from fiction, Ahmet Necdet Çupur’s Les Enfants Terribles (Yaramaz Çocuklar) provides the one documentary in the Festival’s Turkey 2021 section. After earning the Jury Prize at its world premiere in Switzerland at the 52nd Visions du Réel, the film was recognized with the Human Rights Award at the Sarajevo Film Festival and Best Film Award at the 28th Adana Film Festival. In this, his first feature-length documentary, Ahmet Necdet Çupur leaves France for his home village to help out his siblings and chronicle their everyday lives. The result is a story of the clash between old and new, past and present.

Zuhal, the first feature by Nazlı Elif Durlu, will meet Ankara audiences for the first time at the Festival on Wheels. The film premiered in Turkey at the 58th Antalya Golden Orange Film Festival, winning Best Actress for Nihal Yalçın. Nazlı Elif Durlu tells the story of successful Istanbul-based lawyer, Zuhal, her desperate search for a cat she hears meowing in the apartment building where she lives alone, and the absurd encounters that follow with neighbours who she has never set eyes on before.
The 26th Festival on Wheels Ankara screenings will be held at the Doğan Taşdelen Contemporary Arts Centre from 26 November-2 December with the support of the Çankaya Municipality. The detailed Festival program will be announced in the coming days. 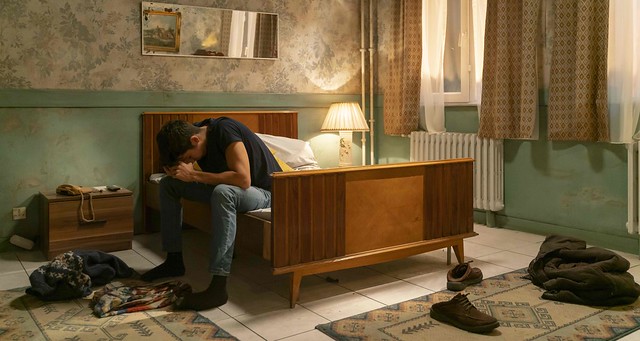