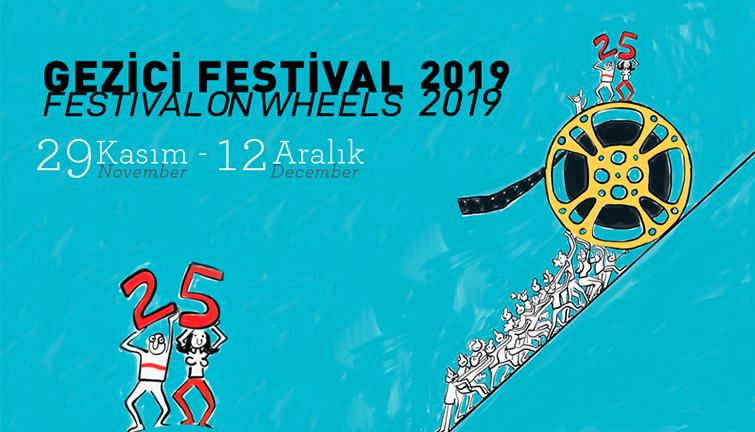 FESTIVAL ON WHEELS IS 25

Organized by the Ankara Cinema Association with the support of the Turkish Ministry of Culture & Tourism, the Festival on Wheels will soon be taking to the road for its 25th edition with another collection of remarkable films. The Festival will be raising the curtain in Ankara from November 29-December 5, in Sinop from December 6-8 and in Kastamonu from December 9-12, promising a blend of film classics and inspired modern cinema on the big screen.

This year, the Festival on Wheels celebrates a quarter century of setting out with unmitigated enthusiasm to bring the distant close to film enthusiasts far and wide, to present cinema at its best to audiences in different cities around Turkey, and to set up encounters that enrich our cultural life.

In the coming days, the Festival will take off once more to meet cinephiles in Ankara, Sinop and Kastamonu respectively, offering a program of now classic sections such as World Cinema, Short is Good, For Kids, Turkish Cinema and Silent Cinema, as well as a new line-up of thematic films curated especially for this 25th anniversary year.

Festival poster from the loyal hand of Behiç Ak

The 25th Festival on Wheels poster is once again the design of veteran illustrator and cartoonist, Behiç Ak, who has steadfastly supported the Festival with his unique designs since 1995.

As in previous years, the World Cinema section of the 25th Festival on Wheels brings audiences a handpicked selection of the latest films to have screened, won awards and made a splash at premier international festivals. The titles in this section are as follows:

Slovak director, Marko Škop’s second dramatic feature and Slovakia’s Academy Award submission, Let There Be Light (Nech je svetlo), examines the rise of the far right and increasingly pervasive culture of hate in Europe today through the story of an ordinary family. The film, which won the Ecumenical Jury Prize and Best Actor Award at the 2019 Karlovy Vary Film Festival, is one of this year’s most noteworthy productions.

This year’s Camera d’Or winner at the Cannes Film Festival’s Semaine de la Critique and the talk of many subsequent festivals, Our Mothers (Nuestras madres) marks the debut feature of César Díaz, a South American filmmaker who has been working on documentaries in France for more than 10 years. In his first fiction drama, Díaz addresses a dark period in the history of his native Guatemala.

Karim Aïnouz, a director familiar for films such as Madame Satã, The Silver Cliff and Futuro Beach, picked up the Un Certain Regard Award at Cannes this year for his latest film, Invisible Life (A Vida Invisível), Brazil’s 2020 Oscar submission which tells the story of two strong women having to contend with repression and prejudice in 1950s Rio de Janeiro.

The new film from Romanian filmmaker, Anca Damian, Marona’s Fantastic Tale (L’extraordinaire voyage de Marona), stands out as one of the exceptional animation films of the year thanks to its visual creativity, touching story and masterful narrative.

Documentary filmmaker, Eliza Capai’s Your Turn (Espero tua [re]volta) left this year’s Berlinale with the Amnesty International Film Prize. This documentary explores the social movement that has swept Brazil in recent years through the overlapping stories of three young activists determined to claim a brighter future.

A winner at the 2019 SXSW Film Festival, Alice is the first feature from Josephine Mackerras, an Australian filmmaker known for her shorts. The compelling drama takes up the extraordinary struggle to survive of a mother whose sheltered life is suddenly turned upside down.

Rare Beasts is the directorial debut from Billie Piper, a high-profile British actress known for her television work. World premiering at the Venice Film Festival, this raw, unconventional black comedy subverts all the clichés of the romcom genre.

Brazilian director, Sandra Kogut’s Three Summers (Três Verões), which premiered at the Toronto Film Festival and recently won a Golden Orange at Antalya for its lead actor, portrays the financial corruption rife in contemporary Brazil through the eyes of a woman who works for a wealthy family household.

Winner of the Berlinale Generation 14plus Grand Prix 2019 and multiple other festival awards since, House of Hummingbird (Beol-sae) is the first full-length film from South Korea’s Bora Kim, who until now has been known for her short films. The critically acclaimed drama tells the story of a 14-year-old girl in search of love.

Nothing Stays the Same (Aru Sendo No Hanashi) marks the second tour as director for young Japanese star Joe Odagiri, who ranks as one of the best actors of his generation. Working with veteran cinematographer, Christopher Doyle, Odagiri has won plaudits at all the festivals where he has taken the film. Standing out in particular for its ambitious visual design, Nothing Stays the Same recently picked up Best Film in the international competition at the Antalya Golden Orange Film Festival.