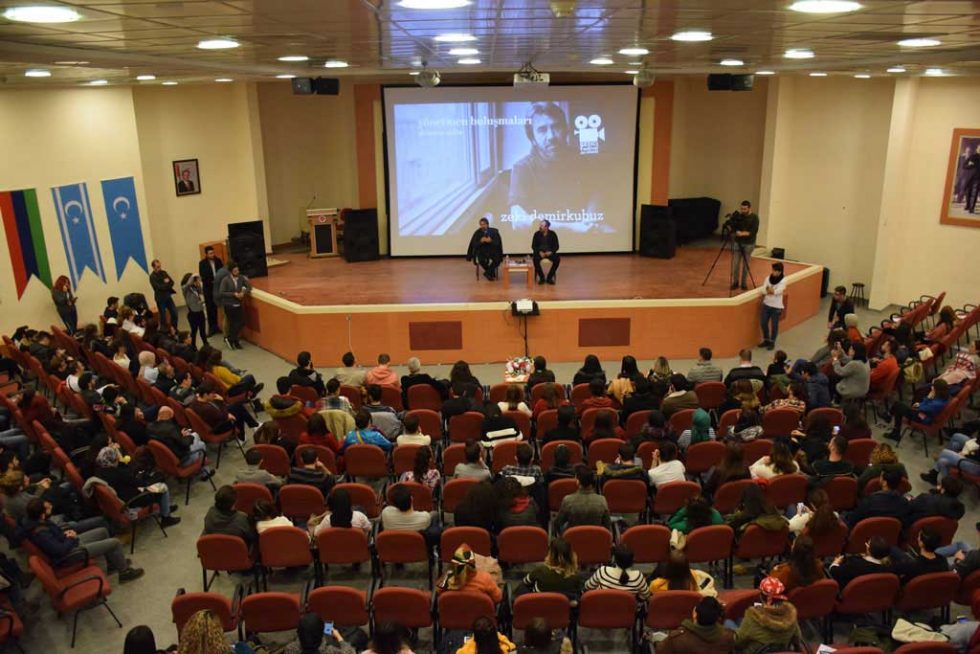 24th Festival on Wheels comes to an end!

The Festival on Wheels organised by Ankara Cinema Association and funded by the Ministry of Culture and Tourism came to an end in Kastamonu after visiting Ankara and Sinop. Actors and actresses (Damla Sönmez, Tuğçe Altuğ, Murat Kılıç, Emrah Kolukısa, Rıza Sönmez, and Muzaffer Özdemir), directors (Mahmut Fazıl Coşkun, Zeki Demirkubuz, Tolga Karaçelik, Ahmet Boyacıoğlu and Ali Kemal Çınar) and producers, curators, film critics and musicians had been our guests at the festival. More than 60 films were screened during two weeks time, in three different cities in Turkey. This year, the Festival on Wheels increased its audience attracting more visitors in every city it travelled.

Famous Directors, Actors and Actresses were our guests!

The leading actress of Sibel, Damla Sönmez, met the audience after film’s premiere in Ankara. We are proud to announce that Ali Kemal Çınar, the director of In Betweenand Deniz Buga, the producer of Distant Constellation, were also among our guests.

Mahmut Fazıl Coşkun’s award-winning film, The Announcement, was screened in Ankara, Sinop and Kastamonu with the participation of the director and the film crew. Moreover, four films under the section “Invisible Cities,” were presented by Mahmut Fazıl Coşkun. DirectorTolga Karaçelik and actress Tuğçe Altuğ received warm comments from the audience with their film, Butterflies. The students of Kastamonu University had the chance to ask questions to Zeki Demirkubuz during “Director Talks”.

Join A Cinematic Journey Around The World

In the section, Print the Legend, realized with the support of the US Embassy, we had three films curated by Jonathan Rosenbaum and Ehsan Khoshbakht. The screenings were presented by Khoshbakht and Imogen Sara Smith. Khoshbakht also participated in the viewing of Memories of Underdevelopment(1968). For this Cuban classic, the Festival on Wheels cooperated with Il Cinema Ritrovato Film Festival.

In the section, Silent Adventure, realized with the support of the Embassies of the United States of America and the Kingdom of the Netherlands, two classical silent movies, restored and improved in quality, were screened. Elif Rongen-Kaynakçı, the curator of silent movies at EYE Film Museum Netherlands presented The Secret of Delftand Robert Byrne, the president of San Francisco Silent Film Festival, curated Behind the Door. Stephen Horne and Frank Bockius, a famous couple, accompanied the screenings with their live music performances.

In the section, Without Refuge, realised with the support of the European Union Sivil Düşün Programme and Goethe-Institut, four films were presented. The actress and trauma counsellor Poh Lin Lee participated in the screening of Island of the Hungry Ghosts, where the audience got answers to their questions. At the Çankaya Municipality Contemporary Arts Centre in Ankara, the Festival hosted a video exhibition to complement “Without Refuge” screening section. 17 videos under the title, ‘Welcome to Turkey’set out to document the stories of Syrian immigrants in Turkey.

Children Films section, realised with the support of the Embassies of the United States of America and the Kingdom of the Netherlands, offered noticeable short films for kids. Kids at the Altındağ Municipality Youth Centre also created their first animations in the workshops led by Dr. Elif Boyacıoğlu. These workshops were supported by the Embassy of the Kingdom of Netherlands, Culture Kids and Cinekid Festival.

Can Evrenol’s pick of horror cinema, Short is Good section composed of the most outstanding short films of the year and Didem Pekün’s two experimental documentaries were among the other films that met our audience during the festival.