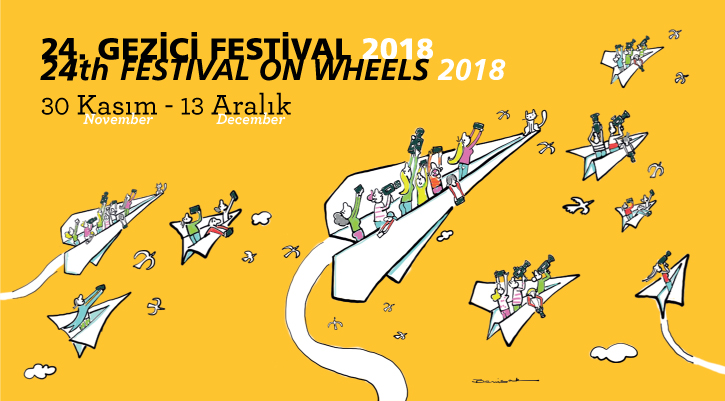 Final countdown begins for the 24th Festival on Wheels!

The Festival on Wheels, organised by Ankara Cinema Association, sets out on its 24th journey on the 30th of November. After its first stop in Ankara, the Festival will travel to Sinop (7-9th December) and complete its route in Kastamonu (10-13th December).

The Festival on Wheels invites the cinema enthusiasts to participate in the tour around the world cinema through the best films of the year. The world cinema tour will offer films like Cold War (Zimna Wojna), Girl, Donbass, and Burning (Beoning) which has just appeared and awarded in Cannes. A list of outstanding Turkish films of the year will also be featured for the Turkey 2018 section including some workshops and interviews with the presence of the film crews. As always, the short films and children films will be available for free viewing. In the Children Films section there will be films from the USA as well as from the Netherlands.

Some other sections of the festival are as follows: Fake News and Exploitation which includes films about fake news, curated by the critics Jonathan Rosenbaum and Ehsan Kloshbakht, and Without Refuge where films about refugees can be found. Moreover, two exceptional films under the title Silent Adventure will be presented accompanied by the live music performances of Stephen Horne and Frank Bockius.

This year’s guest artist will be Didem Pekün for the festival’s other section-in-demand, where the festival audience and artists with backgrounds on contemporary art will meet. In this part of the festival, Araf, her award winning film and Tülay German: Years of Fire and Cinders a documentary featuring the life story of Tülay German, a famous singer, will be featured.

As it does every year, the festival will present three classics dedicated to a specific theme selected by one of the famous filmmakers. And for the first time in the history of the festival, a surprise name from the young Turkish filmmaker generation will prepare a list of short films to be viewed.

Behiç Ak, who has been designing unique posters for the Festival on Wheels since 1995, continues to provide his support on the 24th year.