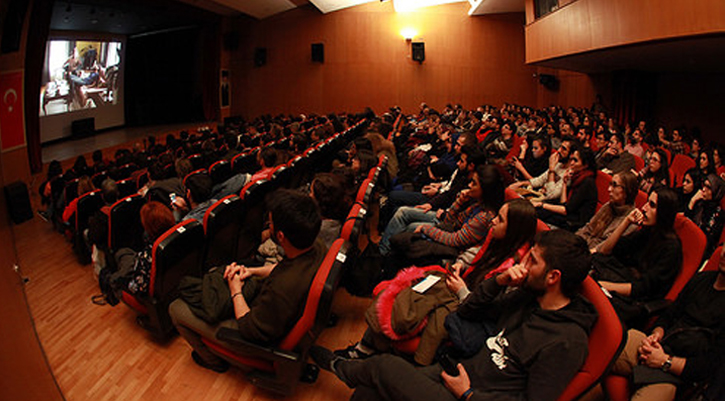 23rd Festival on Wheels has started its journey on 1th December in Ankara. After Ankara, next stop from 8-11 December is Sinop, where the Festival will be hosted by the Municipality of Sinop and Telvin Arts Academy.

Pelin Esmer’s Something Useful (İşe Yarar Bir Şey), which she co-wrote with Barış Bıçakçı will be opening film with participation of film director Pelin Esmer, starrings Başak Köklükaya and Yiğit Özşener and producer Dilde Mahalli. First-time director Onur Saylak’s More (Daha) was adapted for the screen from the novel of the same name by Hakan Günday. Set in a small seaside town on Turkey’s Aegean coast, the film deals with the struggle of a 14-year-old boy to break free from his bullying father and find his own identity. Emre Yeksan’s debut film, The Gulf (Körfez), tells the story of a middle-aged man who returns to his parental home in Izmir following a bitter divorce and confronts his mysterious past; but it is also functions as an allegory of the mindset and democratic regression currently gripping Turkey. Another of the first-time films in this section comes in the shape of Fikret Reyhan’s Yellow Heat (Sarı Sıcak), which collected four awards at the Istanbul Film Festival, Best Film among them, as well as Best Director at the Moscow Film Festival. The narrative drama takes up the story of a patriarchal family who struggle to make a living through traditional farming methods while the youngest son, İbrahim, dreams of shaping his own destiny.

Besides Turkish Cinema, Festival on Wheels presents important films from World Cinema. Haneke’s focus this time is the murkier aspects of an upper middle-class family, which he portrays with a characteristically ironical touch in Happy End. Wajib, the latest offering from Palestinian director Annemarie Jacir, scooped four awards at this year’s Locarno Film Festival. Wajib takes its title from a custom still practised in northern Palestine today whereby the men of a household are required to hand-deliver wedding invitations to all guests. Iranian director Vahid Jalilvand’s No Date, No Signature, which left the Venice Film Festival with Best Director and Best Actor Awards, and the Fajr Film with three Crystal Simorghs. In his second feature, Jalilvand explores the fate of a forensic doctor, Dr Nariman, when he knocks into a motorbike on his way home one night and injures the rider’s eight-year-old son and Nariman must now confront the question of whether he is personally responsible for the boy’s death and his conscience won’t let him go.

This year’s special guest is the Turkish actor-writer, Ercan Kesal. He picked 12 Angry Men directed by Sidney Lumet to offer a different treatment of the theme of justice and conscience, which Kesal regards as “the fundamental problematic of our existence”.

As in previous years, important films from the silent era again make up one of the special sections of the Festival on Wheels programme. This year, the film Spanish Dancer that is directed by Herbert will meet with film lovers in Sinop. The film was selected with the help of Elif Rongen Kaynakçı, a silent film curator at the EYE Film Museum in Amsterdam and with the help of the Embassy of USA and Embassy of the Netherlands. Also Spanish Dancer will be accompanied by live music from the Turkish band, Baba Zula

This year, director Zeki Demirkubuz will be the guest of the festival in Sinop.