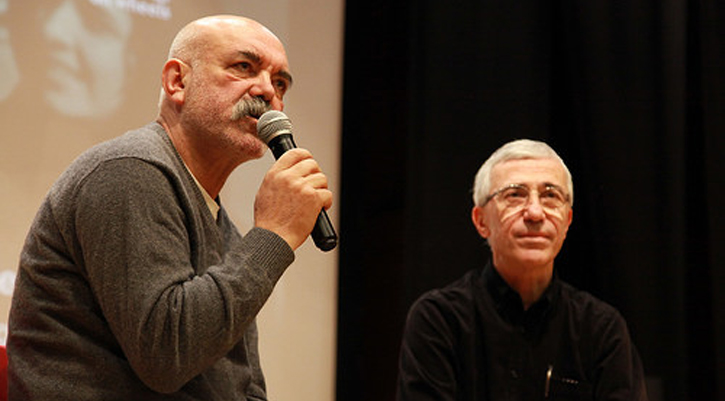 Justice and conscience with Ercan Kesal

Festival goers were treated to three films based around the themes of justice and conscience that were chosen exclusively for the Festival on Wheels by Ercan Kesal. After screenings of A Short Film About Killing, The Salesman and 12 Angry Men, Kesal came to talk to the audience about his selection. The actor-writer began by suggesting that although we may struggle to define justice in absolute terms, we do know what injustice is. On that basis, he argued, justice could be described as the act of being unfailingly just. According to Kesal, our greatest tragedy is that people believe their own truths to be infallible and think that they know everything. The three films in his selection reflected these ideas, he said. When taking questions, he was asked whether his choice of titles was influenced by the steady decline of collective memory and parallel rise in social indifference. Kesal answered: “Our recollections, our past, our memory are guardians of our hearts. We should champion the memories in our hearts because they banish the evil that resides there.”

New version of The Way premieres in Turkey

The Festival on Wheels got under way with a screening of the re-edited, digitally restored version of The Way (The Way). The screening included a presentation by Donat Keusch, one of the producers, who spoke about the film’s 35-year journey. Keusch explained that when he applied to the Cannes Film Festival back in 1982, the selection committee asked that the film be made shorter. Consequently, the version of The Way that Yılmaz Güney wanted didn’t actually make it to Cannes; and then because, after winning the Palme d’Or, the film immediately sold to 50 territories, all ideas of returning to the cutting room were put on ice. According to Keusch, the version of the film being shown at the Festival on Wheels is closest to the cut that Yılmaz Güney had in mind. Admitting that only now had he managed to honour his promise to Güney to re-edit the film, the producer said it had taken six full years to assemble the missing fragments of the film, re-cut and digitally restore it. On a final note, Keusch noted that after premiering in Turkey at the Festival on Wheels, Yol: The Full Version would enjoy a theatrical run in countries across Europe and then be released on DVD and Blu-Ray in 2018.

Festival goers got the chance to see five videos by the Israeli artist, Guy Ben-Ner, at the Goethe Institut. After the films were shown, Turkish artist Köken Ergun held an Artist Interview with Ben-Ner. Curated by T. Melis Golar, an exhibition of Ben-Ner’s work entitled ‘I Wish I Was Somewhere Else’ will continue to run at the Füreya Koral Gallery of the Çağdaş Sanatlar Merkezi (Contemporary Arts Centre) in Ankara until 10 December.

The collaboration between Turkish band Baba Zula and the Festival on Wheels continues. This year, the band provided live music accompaniment to Filibus: Mysterious Pirate of the Skies, a silent film that screened in another link-up with the Amsterdam based Eye Film Museum.

Festival screenings at the Çankaya Contemporary Arts Centre and Goethe Institut have been extremely well attended by Ankara audiences.