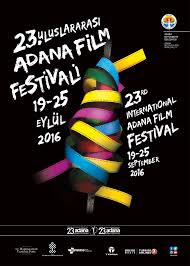 Ankara Cinema Association organized the International programme of the 23rd Adana Golden Boll Film Festival which was held between 19-25 September 2016.

In the World Cinema section of the Adana International Film Festival, cinema lovers are promised a selection of not-to-be-missed productions. With all festival screenings free of charge, audiences can look forward to a line-up that includes: Ken Loach’s I, Daniel Blake, a drama widely hailed as one of the best films of his career; Frantz, the second period piece in François Ozon’s glittering filmography which premiered at the Venice Film Festival; the Dardenne brothers’ Palme d’Or contender, La Fille Inconnue (The Unknown Girl); winner of the Best Film trophy at Annecy’s International Animated Film Festival, Ma Vie de Courgette (My Life as a Courgette), which was also selected for the Directors’ Fortnight at Cannes and reckoned to be among the best of the line-up; the high-energy (M)uchenik (Student) from Kirill Serebrennikov, a Russian director who never loses the ability to surprise with his work; Captain Fantastic, a comedy drama starring Viggo Mortensen as a father intent on giving his six kids an alternative life in the forest; the Maren Ade directed Toni Erdmann, a critique of contemporary life that first picked up the FIPRESCI Prize at Cannes and then was named FIPRESCI Film of the Year at San Sebastian; Sieranevada, this year’s Palme d’Or contender from pioneer of the Romanian New Wave, Cristi Puiu; the debut film from rising Romanian star Bogdan Mirica, Caini (Dogs), which won FIPRESCI Prize in the Un Certain Regard section of the Cannes Film Festival; this year’s Un Certain Regard opener, Eshtebak (Clash), from the Egyptian director, Mohamed Diab; Brazilian filmmaker Kleber Mendonça Filho’s Aquarius starring Sonia Braga, who many will remember for her stellar performance in Kiss of the Spider Woman; Auf Einmal (All of a Sudden), the first German production from Turkish festival favourite Aslı Özge (Men on the Bridge and Lifelong) which premiered in the Berlinale’s Panorama Special programme; the debut film from Finnish director Juho Kuosmanen, Hymyilevä Mies (The Happiest Day in the Life of Olli Maki), which left Cannes with the Un Certain Regard Award; Ana Katz’s Mi Amiga del parque (My Friend from the Park), which scooped the Screenwriting Award at Sundance and earned nominations in numerous categories at both the Film Critics Association and the Academy of Motion Picture Arts and Sciences Awards in Argentina; Fai Bei Sogni (Sweet Dreams) from one of the living legends of Italian cinema, Marco Bellocchio; Apprentice, an intriguing example of Singaporean cinema directed by Junfeng Boo; the latest film from Pedro Almodovar, Julieta; Danish director Martin Zandvliet’s Under Zandet (Land of Mine); a romantic comedy from Saudi Arabia, Barakah Yoqabil Barakah (Barakah Meets Barakah), which won director Mahmoud Sabbagh the Prize of the Ecumenical Jury in the Forum at this year’s Berlinale; Babak Jalali’s Radio Dreams, which picked up the Tiger Award at Rotterdam and the Grand Jury Prize at Seattle’s International Film Festival; and last but not least, Omer Fast’s adaptation of the cult novel by Tom McCarthy, Remainder.

The documentaries presented during the Festival were The Beatles: Eight Days A Week – Touring Years by Ron Howard, Zero Days by Alex Gibney, The Peacemaker by James Demo, Shadow World by Johan Grimonprez, About Heaven by Stéphane Goël and Tadmor by Monika Borgman and Lokman Slim.

The musical comedy Man of la Mancha (1972) by Arthur Hiller was presented on the occasion of the 400th anniversary of the famous Spanish writer Cervantes.