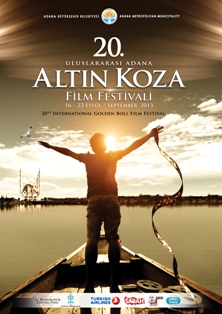 World Cinema section includes Turkish premieres of below mentioned films: Coen Brothers’ latest film, Inside Llewyn Davis, which won the Grand Prize of the Jury in Cannes; Sebastián Lelio’s Glory, which scooped Best Actress and two further awards at this year’s Berlin Film Festival; Cannes competition title, Only Lovers Left Alive, the latest film from one of the leading lights of American independent cinema, Jim Jarmusch; winner of the Best Actress award at this year’s Cannes Film Festival; The Past, the last film by Asghar Farhadi; Hirokazu Koreeda’s Like Father, Like Son, which earned the Jury Prize at this year’s Cannes Film Festival; Heli, which brought outspoken Mexican director Amat Escalante Best Director’s Award at Cannes 2013; the Arnaud Desplechin directed Jimmy P: Psychotheraphy of a Plains Indian, which competed at Cannes this year; The Notebook by Hungarian director János Szász, which was awarded the Crystal Globe at this year’s Karlovy Vary Film Festival; well-known Palestinian director Hany Abu-Assad’s latest film, Omar; and the Ritesh Batra directed The Lunchbox.

Brazilian Cinema At The Golden Boll

The Adana Metropolitan Municipality’s 20th Golden Boll Film Festival is to take a look at Brazilian cinema in an endeavour to understand the country’s recent riots. In a selection of films entitled ‘Not Only Carnival and Football’, the Festival will be presenting the acclaimed trilogy by master director Glauber Rocha alongside a batch of more recent productions.

In terms of surface area, Brazil ranks as one of the world’s largest countries, but it is also one of the most culturally diverse. In June of this year, riots erupted in the capital, Sao Paolo, and soon spread nationwide in a popular uprising which is reshaping the country. As part of the 20th International Adana Golden Boll Film Festival, the ‘Not Only Carnival and Football’ section uses the medium of cinema to hold up a mirror to the social unrest characterizing Brazilian history. The section presents a selection of classic and contemporary films in a bid to sketch the country’s political profile and transcend the image of wild partying at the Rio carnival and outstanding success on the football field which is more normally associated with Brazil.

When it comes to Brazilian cinema, perhaps the first name that springs to mind is that of director Glauber Rocha. Certainly, his films are one of the foremost references for understanding Brazil’s social structure and political history. Rocha initiated the Cinema Novo movement and all three films of the acclaimed trilogy he made based on the ‘Aesthetic of Hunger’ film manifesto will be screened for the first time in Turkey at the Golden Boll. The films are respectively: God and the Devil in the Land of the Sun, also known as Black God, White Devil; Entranced Earth; and Antonio das Mortes.

‘Not Only Carnival and Football’ is also to include the latest film by Lúcia Murat, Memories, They Told Me, which won the FIPRESCI Award at the Moscow Film Festival. Murat has justifiably made a name for herself in Brazilian cinema by challenging the 1964 military takeover in both her political stance and her documentary films. Memories, which stars Franco Nero in the lead role, is set in the present day and looks at a group of friends opposed to the coup as they confront the past.

Another of the section’s notable films is the much anticipated first feature from Kleber Mendonça Filho, a director who has earned international acclaim for his short films. Neighbouring Sounds offers an insight into the socio-economic fabric of Brazil through the fears endemic in a wealthy neighbourhood of the mega-city, Recife, and the security issues facing its well-to-do residents. The film was selected for numerous leading festivals and garnered a total of 12 awards.

Northern Lights at the Golden Boll

The World Cinema section at the Adana Metropolitan Municipality’s 20th Golden Boll Film Festival, which runs from 16th-22nd September 2013, will be bringing audiences a line-up of outstanding examples from Scandinavian cinema. As a self-contained bill within World Cinema, ‘Northern Lights’ features standout films from the last few decades made by eight directors from five countries; they range from the Finnish master, Aki Kaurismäki, to the young Icelander, Dagur Kári.

Aki Kaurismäki is a genius at blending the harshness and solitude of the North with a healthy dose of black humour to produce human comedies of universal appeal. In one such example, he pitches one of the most tragic characters of all time, Hamlet, into the setting of a large company beset by skulduggery. Hamlet Goes Business (1987) lampoons humanity’s weakness for power and money which all too often makes us inhuman.

We find ourselves on the road between Finland and Istanbul in the company of a super-lackadaisical, aimlessly drifting bass guitarist. Zombie and the Ghost Train (1991), from the elder of the two Kaurismäki brothers, Mika, is a film about the comic and absurd adventures of a young man reluctant to conform.

The Boss of It All (2006) is a low-budget, but high impact offering from Denmark’s Lars von Trier, the pioneer of the Dogme movement well-known for his creative obsessions. The film homes in on the bizarre situations arising between office staff and their boss.

A soulless setting where neither food nor being in love give pleasure. In The Bothersome Man (2006), a film highly acclaimed on the festival circuit, Norwegian director Jens Lien weaves subtle humour into the story of what can happen to an ordinary man when he wakes up in just such a city.

Salmerfrakjøkkenet / Kitchen Stories (2003) sets out from the rational premise that a kitchen should be functional and ends up packing a poignant punch. Norway’s Bent Hamer, a director who won recognition with his homeland set Eggs and US production Factotum, brings off a masterful film about loneliness and friendship.

A musical detective comedy about ear-splitting anarchy… Sound of Noise (2010) employs ingenious contrivances to tell the story of a music-hating police officer on the trail of a percussionist group whose public performances with improvised everyday objects are terrorizing the city. Swedish directors Ola Simonsson and Johannes Nilsson drive home to us with playful humour how desensitized we have become to the sounds and rhythms of everyday life.

Iceland’s Dagur Kári, director of the multi-award winning Noialbinoi / Noi the Albino, returns with some extraordinarily nuanced observations on what it is to be young and different in Voksnemennesker / Dark Horse (2005). The film is a kind of homage to the cinema and spirit of the 1960s.

A sharp satire on the state of the world and humanity as disaster looms is delivered in Sånger från andra våningen / Songs from the Second Floor (2000) by Roy Andersson, the Swedish director who first made a name for himself in the 1970s. Made up of 45 short stories, this powerful film shared the Jury Prize at the 2000 Cannes Film Festival.