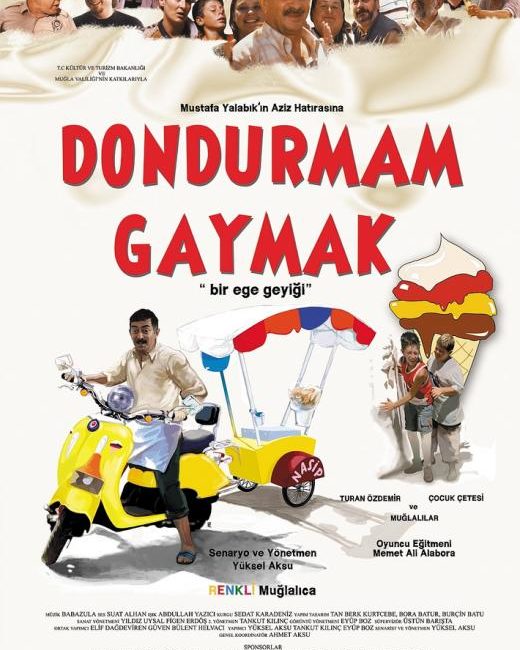 Ice Cream, I Scream is a film that gives a sense of laughing at itself and many other things besides; you only have to look at the title and tagline “An Aegean Romp”. But this feeling has less to do with the film’s outlook than with the people of Muğla and their attitude to life. It is they, after all, who make up the cast and played a large hand in the ‘collective’ style production. In this context, the tone of the film is a lot like everyday relationships in the rural Aegean: at times so rowdy you cannot think straight, high-spirited, full of slang and sardonic… The film tells the story of Ali Usta, a small-time traditional ice cream maker fighting for survival against the multinational brands. In a bid to save his business, Ali Usta makes a commercial, which is later aired on a local television channel, and buys a motorbike that allows him to make his business mobile. But when a bunch of mischievous village kids, who also happen to love ice cream, steal the motorbike, things get complicated. Convinced that this is the work of his corporate rivals, Ali Usta declares war against the ice cream cartel in order to get his motorbike back. The film opens with a quote from De Sica, to the effect that there is an actor in everyone; and its story is crammed with references to The Bicycle Thieves, one of the manifesto films of the neorealist movement. The correlation between Ice Cream, I Scream and neorealism goes well beyond telling the story of rural folk: the fact that so much effort was made to incorporate rural life into the more practical side of making the film is far more telling. Aside from a mere handful of professionals, the cast and crew were made up entirely of local people. And the film takes their accents, traditions, day-to-day anxieties and sense of humour uncompromisingly to the silver screen with little concern for whether they are ‘understood’. Ice Cream I Scream is a film that will find its place within a trend that has only recently begun to crystallise in Turkish cinema: that of the ‘return to the province’. In this, it will join films such as Boats out of Watermelon Rinds and Times and Winds. If, in times to come, films of this breed multiply and a new picture of the provinces emerges in Turkish cinema, ice cream, I scream will surely provide one of the most striking and colorful examples, not only thanks to its story line, but also because it takes the very creation and production process direct to the provinces. Nadir Öperli
Turkey
'
2006
Director
Yüksel Aksu