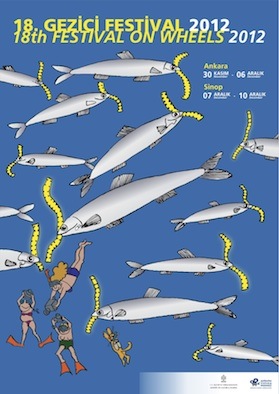 Organized by the Ankara Cinema Association with the support of the Turkish Ministry of Culture and Tourism, the 18th Festival on Wheels is preparing to hook up with film audiences between 30th November and 10th December.

The show will, as always, get on the road in Ankara, where screenings are scheduled for 30th November-6th December. After leaving the capital, the Festival will head straight for the Black Sea to Sinop, one of last year’s hosts, to continue its programme with the support of the Governorship of Sinop, the Municipality of Sinop and the Sinop Culture and Tourism Association from 7th-10th December. Screenings in Ankara will take place at the Kızılay Büyülü Fener Theater and the Goethe Institute.

Titles from World Cinema to premiere in Turkey
In its 18th edition, the Festival on Wheels will once again be offering film fans a line-up of World Cinema. The selection is made up of films from countries all over the world from Chile and South Korea to Austria and Serbia, many of them award-winners at major international festivals such as Berlin, Cannes and Rotterdam. Several, including The King of Pigs, The Year of the Tiger, The Parade, Here and There, Thursday Till Sunday and The Cleaner, will be premiering in Turkey at the Festival on Wheels.
Among titles featured in this section are the Antonio Méndez Esparza directed Here and There (Aquí y allá), a US-Spanish co-production which won Grand Prize at the Cannes Film Festival Critics’ Week; Srdan Dragojevic’s The Parade (Parada), a box-office sensation in the Balkans; and the animation film directed by Sang-ho Yeon of South Korea, The King of Pigs (Dwae-ji-ui wang), which screened at Cannes.
The latest to come out of South American cinema is also well represented in this year’s Festival on Wheels World Cinema section. You’ll have the chance to watch the transformation of a family in Chilean director Dominga Sotomayor’s Thursday Till Sunday (De jueves a domingo), a winner at Rotterdam, Poland’s New Horizons and Transilvania among several other festivals; the effects of Chile’s devastating 2010 earthquake in Sebastián Lelio’s The Year of the Tiger (El año del tigre), a Junior Jury Prize winner at Locarno; and the offbeat friendship between a solitary man and a young boy in The Cleaner (El limpiador), the first feature from Peruvian director Adrián Saba. Meanwhile, No, a feature directed by Pablo Larraín and Chile’s entry for Best Foreign Language Film at the 2013 Academy Awards, will take you back to the oppressive Pinochet regime of the 1980s.
The section features another Academy Award submission in the form of Michael Haneke’s Love (Amour), the portrayal of an elderly couple’s heartrending relationship which brought the Austrian director his second Palme d’Or in three years. And in the Benh Zeitlin directed Beasts of the Southern Wild, which scooped plentiful awards at the Cannes, Los Angeles, Seattle, Sundance and Sydney Film Festivals, you’ll be led into a fantastic world by six-year-old Hushpuppy.Turkish Cinema 2012The Turkish Cinema 2012 section presents a pick of this year’s productions from home turf, and actors and directors attached to the films will get together with audiences in gala performances during the Festival. The section includes Mold (Küf), the poignant story of a father still desperate for news of his missing son after 18 years, which won first-time director Ali Aydın a Lion of the Future Award at Venice; and Circle (Devir), the latest offering from Derviş Zaim, who this time turns his camera on Anatolia and the cycle of the natural world.
Also in the line-up are Know My Name (Siirt’in Sırrı), a documentary co-directed by İnan Temelkuran and Kristen Steven about the teenage female wrestling champion, Evin Demirhan, which scooped three awards at the Adana Golden Boll Film Festival; the first feature from Belmin Söylemez, Present Tense (Şimdiki Zaman), which garnered five awards at Istanbul and Adana; and winner of the Best Film and Best Screenplay awards at Adana, Voice of My Father (Babamın Sesi), the latest film from filmmaking duo Orhan Eskiköy, who gained critical acclaim for his feature documentary, On the Way to School, and Zeynel Dogan.
There are award-winners aplenty in this section, another of them the Erdem Tepegöz directed feature, The Particle (Zerre), which received four nods at the Antalya Film Festival, including Best First Film and Best Director. The film portrays the struggle of a woman, her young daughter and her mother to keep their heads above water in a hostile employment environment. Meanwhile, in his latest film, Inside (Yeraltı) – a winner at the Istanbul, St Petersburg and Osian’s Cinefan Film Festivals – Zeki Demirkubuz presents a striking adaptation of Dostoyevsky’s ‘Notes from the Underground’ set in present-day Ankara.
Somewhere In Between (Araf) brought director Yeşim Ustaoglu the Black Pearl Award for Best Narrative Film at the Abu Dhabi Film Festival, along with accolades for her cast at Adana, Moscow and Tokyo. In the coming-of-age film Ustaoglu weaves a tragic love story into the lives of her rural characters, who find themselves trapped between the past and the future. In his latest feature Night of Silence (Lal Gece), which took the Crystal Bear at Berlin followed by further awards at the Nuremburg, Würzburg, Copenhagen, Adana and Tokyo Film Festivals, Reis Çelik leads a 14-year-old village girl and a man many years her senior into the bridal chamber, where all but a few minutes of the drama unfolds.

The 18th Festival on Wheels dedicates one of this year’s sections to the Favourite Films of seasoned actor, writer and director Tuncel Kurtiz. The selection features five American and European classics watched “over and over” by the master of Turkish cinema. Among them are Luchino Visconti’s The Leopard (Il gattopardo), a reflection on the decline of the aristocracy and rise of the bourgeoisie in 1860s Italy, and Elio Petri’s Investigation of a Citizen Above Suspicion (Indagine su un cittadino al di sopra di ogni sospetto), which challenges authority through the conceit of a police inspector killing his mistress. On an altogether different theme and in a tie-up between Swiss director, Alain Tanner, and British writer, John Berger, Jonah Who Will Be 25 in the Year 2000 (Jonas qui aura 25 ans en l’an 2000), follows the lives of a group of men and women in Geneva who search for renewed meaning now hopes of the 1960s revolution have been shattered.

You’ll also have the chance to watch two 1970s classics from US cinema. In the first, Nashville, Robert Altman employs his own inimitable style to weave together 24 characters in multiple storylines and deliver a trenchant critique of political change in 1970s North America against the backdrop of country music. The second sees Bob Fosse catalogue the life of a big-time New York choreographer in the semi-autobiographical musical fantasy, All That Jazz.

War, the relics of war

n this year’s edition of Special Screenings, the 18th Festival on Wheels will take another incisive look at the unchanging crises of the modern world. Films in this section present a stark and offbeat account of children growing up in a war environment, contemporary vestiges of fascism, commonly held to be the shame of the 20th century, and the battles waged by people in the west against corporate life and authority.

In the Growing up with War section, you’ll travel to two different parts of the world to watch the effects of ongoing wars from the perspective of children. Montreal based filmmaker Kim Nguyen takes a look at child soldiers through the eyes of a 14-year-old girl in his African set drama, War Witch (Rebelle), which won young newcomer Rachel Mwanza Best Actress awards at both Berlin and Tribeca. Elsewhere, In My Mother’s Arms, a documentary co-directed by Iraqi brothers Atia and Mohamed Jabarah Al Daradji, chronicles the hopes and struggles of tireless student Husham, as he struggles to rebuild the war torn lives of orphan children in Baghdad.

In Blood Must Flow – Undercover Among Nazis (Blut muss fliessen – Undercover unter Nazis), a special screening in the presence of director Peter Ohlendorf, you’ll have your eyes opened to chilling displays of neo-Nazi culture in contemporary Europe. Retracing the footsteps of an investigative journalist who spent seven years clandestinely filming neo-Nazi gigs in cities around Europe, Ohlendorf combines cuts of this footage with shots of the concert venues in his documentary.

In Manufacturing Defect, a section comprising two feature-length and two short documentaries, the 18th Festival on Wheels will examine corporate life, production systems, the police, authority and, more generally, the status quo of Western civilization in the 21st century.

In the first full-length documentary, Work Hard – Play Hard, director Carmen Losmann takes a close-up look at change and people management strategies in the management work spaces of Germany’s big corporations, and in so doing opens the door on a dark world in which staff morph into mere data. Second up is Andrey Gryazev’s Tomorrow (Zavtra), a piece about the internationally renowned Russian performance art collective, Voina. In this micro-budget documentary, the Muscovite director investigates the group’s roguishly provocative and politically charged pranks, as well as the lives behind the performances.

Before each of these two feature-length films, Festival audiences will get to watch a documentary short apiece. Machine Man(Hombre máquina) turns the camera on workers in Bangladesh to reveal the extent to which humans are still used for heavy physical labour in the 21st century. Meanwhile Fireworks (Fuochi d’artificio) shows how a group of ecologists take advantage of New Year fireworks celebrations to blow up a large steel factory.

In Beyond Enchantment: Larry Jordan Retrospective, festival audiences will be treated to one feature film and eight shorts by one of the pioneers of animation and experimental cinema, American filmmaker Larry Jordan. The avant-garde Jordan, a director acclaimed for his surreal collage animation and singular cinematic style, has been making his trademark films for 60 years. In Sophie’s Place, one of Jordan’s few full-length films which will get an airing at the Festival, thousands of hand-painted, single-framed images merge with shots of Hagia Sophia, promising audiences an unparalleled visual journey.

The now traditional Short is Good and Children’s Films sections will again take their place in this year’s Festival. Selected from over 1000 entries from all over the world, the line-up of Festival shorts will introduce audiences to the innovative cinema of myriad different countries. The Short is Good section includes fare from Germany, Austria, Belgium, the Czech Republic, Estonia, France, South Korea, Britain, Russia, the Slovak Republic and Turkey. Children’s Films: the Netherlands will present younger Festival-goers with a pick of animation films from the two Dutch directors, Frodo Kuipers and Arjan Wilschut. As well as a fun-filled Animation Workshop by Jenny Van Broeke and Mieke Driessen for kids, the 18th Festival on Wheels programme will be including a New Media Documentary Workshop, offering both theoretical and practical content for adults.

Check out these free screenings!

The now classic Festival on Wheels short film screenings fall this year into three categories: Short is Sweet, a selection of innovative films from around the world; Finland in Short, a sample of Finnish work from the past 30 years; and Cowboys of the North: Aki Kaurismäki, which covers the short films of Finland’s most prominent director. Films from Belgium and France make up the Children’s Films section and promise to appeal as much to adults as to the young.

In this year’s Festival publication, the Bookshop on Wheels examines the effect of technology on social experience and the creative industries and presents readers with a range of different views. Edited by Tül Akbal Süalp and Burçe Çelik, Revolution or the Middle Ground: Output, Experience, Technology will be published by the Ankara Cinema Association in collaboration with Baglam Publishing. The book will be on sale from December.

As a faithful contributor to the Festival on Wheels since year one, Behiç Ak has produced consistently witty and inventive designs for the annual Festival poster and remains part of the team this year with his 18th poster.

Films in this Festival